A Long Night in Lapland 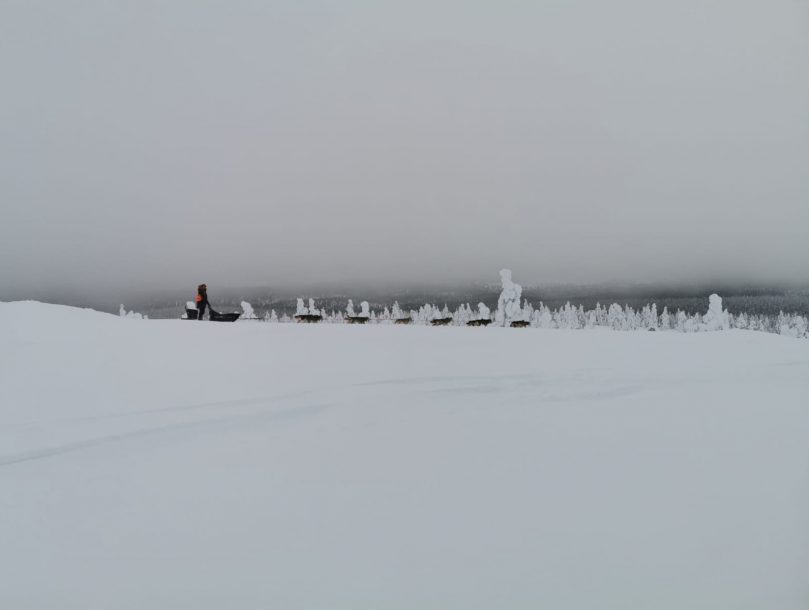 With so little daylight available, I felt confused and even a bit worried: Is this weather going to continue forever?

My two and a half months in Lapland as an intern were like a dream—a white dream. Not that everything was fantastic or romantic. The workload was heavy and there was a constant chaos. However, when I returned from Lapland back to my familiar hometown of Helsinki in the end of January, I immediately missed the white under my feet and covering my eyes. The pure whiteness of Lappish snow had gotten hold of me.

I worked in Saariselkä, a small 350-citizen village, 300 km north from Rovaniemi. The hotel was located on a fell called Kaunispää (“Beautiful Head”), next to the upper station of a ski lift. The first two weeks staying at a four-star hotel room on my own was a luxury. But outside snow blowers on the ski slopes produced a constant fog of snow. With so little daylight available, I felt confused and even a bit worried: Is this weather going to continue forever? It was only end of November. Constant snow fog day and night made me wonder if I have lost my sight (Photo: Ying-Yi Wu)

It was in this fog of snow that I started my first snowmobile excursion as a back-end guide. At first, I was anxious and nervous. Although I have good command of motorcycles, I needed to comfort myself murmuring: “If the customers can do it, so can I?!”

At times, the snow was so dense that I could hardly see one meter ahead. I felt that I was driving blindly. But away from Kaunispää the snow curtain lifted, and a great open view was revealed in front of me. My fears disappeared after a couple of excursions, and I relaxed, and was stunned by nature: On top of the fells you were exposed to rough wind accompanying with heavy snow, while down in the woods there were incredible peace and clear visibility. At different times of the day, under different weather conditions, or with different guides and customers, the same track could lead to an entirely different experience. Soon after the fog lifted, the famous polar night arrived. All through December I felt as if I did not really wake up, even though I enjoyed a good and long sleep at night. The lack of light affected me a lot.

December is the high peak for tourism business, and some guides even worked 16 hours a day for several days consecutively. However, when I asked the locals of Lapland about polar night, they said they love it. One said she is often moved to tears by its absolute silence. The birds don’t sing in the woods. Polar night is so unique, just like a piece of music touching her soul. Another said that it’s a time of warmth and rest, when families gather together at home. After the hectic pace of summer and autumn, finally everything quiets down around us and in us.

The beauty of Lapland is unrivaled—not only the scenery, but also the people. The people of Lapland are warm, open, and talkative. They help you whenever they can without a moment’s hesitation. They love joking, but they can also be straightforward even to the point of sounding rude.

I had my most authentic experience of Lappish wilderness life while spending a week at a fellow guide’s wilderness cabin without electricity or indoor toilet, but with sauna! Our daily routine consisted of making fire and lighting candles, carrying wood and water to the cabin, cooking, having sauna, and playing card games. In between we went ice fishing, Altai skiing, snowmobiling, hunting, walking on the frozen lake covered with thick snow under the starry sky, or sitting in an outdoor palju (“bathtub”), chatting over a beer and inspecting the sky for any sign of northern lights. A wilderness cabin built in the middle of nowhere (Photo: Ying-Yi Wu)

I also learned to set traps for catching grouse. We looked for ideal bushes to attach transparent strings between the branches. Then we cleared the snow from some branches and broke off some others, creating an attractive gateway for the grouse to move through. The smoke of palju: a breath of human presence (Photo: Ying-Yi Wu)

On the first morning of the new year 2020, towards the end of the polar night, Kaunispää offered us an incredible sky—a beautiful start of the new year after the long darkness. What makes polar night so special is not only its ability to calm down the soul, but also the rare glimpse of beauty and light that it offers. The incredible morning sky on New Year 2020 at Kaunispää. The first sunrise was only on 6th of January. (Photo: Ying-Yi Wu)