Long Time No See – A Week at the Metsäkartano Youth Centre 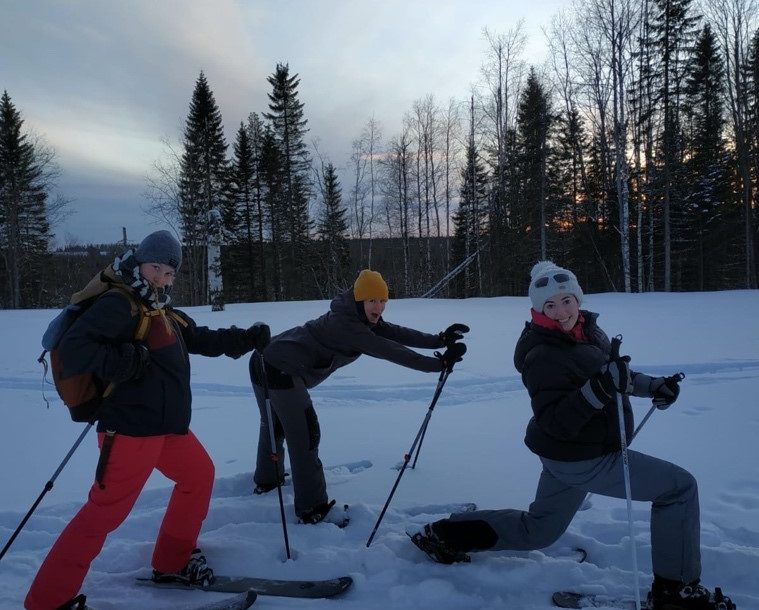 We had not seen each other for almost four months and then here we were, the very first day after our internships officially ended, together for a whole week. Yes, literally 24/7.

If you are reading our blog posts regularly, you probably already know something about the internship adventures of the first-year adventure and outdoor education students. If not, let me quickly summarize our winter: We were all doing internships, mostly around Finland (especially in Lapland) from the middle of November until the end of February. That means that we basically had not seen each other for almost four months! I know, it is a very long time and I guess you are wondering how our reunion went after all this time?

The sweet secret is that we basically jumped from one extreme to another. As I mentioned, we had not seen each other for almost four months and then here we were at the Metsäkartano youth centre, on the very first day after our internships officially ended, together for a whole week. Yes, literally 24/7.

Do not get me wrong, it was very nice! Also, we were not completely alone – we had two of our lecturers with us and also a group of students and lecturers from the IT Tralee school based in Ireland joined us for this week. The reason why we all gathered together was our joint program for the whole upcoming week, which is also the topic of this blog post.

We were all located in the central Eastern Finland, in a place named Metsäkartano which is one of the national youth centres. It is a complex of buildings just next to a lake which was at the beginning of March still frozen and a layer of snow was present everywhere around. The goal of the week was to learn and practice our winter activity skills, our leadership and navigation skills but also to gain some knowledge on the professional skills of a community educator. Unfortunately, for our class it was little bit difficult to participate in the planning of this whole week since it was so long ago that we were together as a group. Therefore, the planning & preparations of this whole week was up to the IT Tralee students and I have to say that they did a very good job. It was educational, entertaining, challenging and we got to know some new people.

So, how did the week go and what exactly did we do? Let me start with the travelling day, Sunday. I think that both groups had a very long day (some came by train and bus from Helsinki, some by car from Lapland, some by plane from Ireland) and when we all met in the evening at Metsäkartano, little did we know about our very first group exercise waiting for us – digging out the bus that got stuck in the snow. However, I think that was a great and spontaneous ice breaker so the next morning we did not feel so awkward anymore when we all met in the meeting room.

As I mentioned, one purpose of this week was to learn and practice winter activity skills so on the first day, Monday, we split into smaller groups, put on the skin-based skis and spent whole day wandering around, trying to figure out how these skis work. Later that day we split into three different groups and we spent the rest of the week mostly in these groups.

A part of the week’s program was to spend one night in not-so-far-away cabin, Hevonkuusi, so we packed our overnight gear (sleeping bag and mattress included), map and compass and off we went. We negotiated the best route options ahead as a group but on the way we took turns in the navigation and leadership so everybody had a chance, for a while, to practise how to set the right pace, check the direction and terrain with the help of a map and compass (and our instructors). My group was the first one to go on this little adventure while the other two groups stayed in the surroundings of Metsäkartano and prepared a bit more for their overnight trips since it was the very first time on the skis for some people. Crossing a stream on the way to the Hevokuusi cabin (Photo: Emmi Sarvijärvi)

Our group was incredibly lucky with the weather because it was sunny on our way there and also on the next day on our way back. The temperature was slightly below zero which meant perfect snow conditions for our altai skis.

For the last two days – Thursday and Friday – the weather got worse and the temperature warmer so some of us tried snowshoes and cross-country skis instead. It turned out that the altai skis are not really good for that type snow so people with snowshoes won the choice of the day.

We also had a short environmental education workshop with two wildlife biologists from IT Tralee and a small woodcarving workshop with one of the IT Tralee students. It was a very nice activity to end the week with, and we also had there our very last outdoor lunch, all of us together. The week was not only focused on our technical skills but also on our personal development and growth, our well-being as individuals and our positive mindset. Every morning we started our day with so called “Three M” exercise – mindset, mindfulness and movement – and every time it was little bit different, depending on the leader.

We also followed the PERMA model of well-being where each letter has a meaning that we tried to focus on and at the same time we took a short moment for ourselves to realize what we are grateful for that day.

We were also given a group journal task for the whole week: Each group got a notebook where we had to write down what happened every day, kind of a journal that we always read out loud during a reflection time every evening.

As I mentioned, our student group did not really participate in the planning process, but I think that the IT Tralee students and the lecturers responsible did a good job. I think we all enjoyed, we learned and gained new skills and it was nice to see each other after such a long time to find out that actually nothing had changed.